Joseph Morgan Kennedy – my dad one year after his death 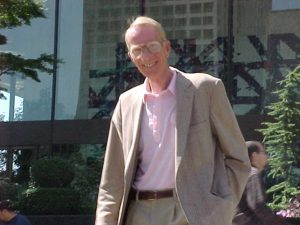 My Father – Joseph Morgan Kennedy Died One Year Ago Today

Today marks the day my dad died one year ago. I don’t remember crying, but I probably did. It wasn’t so much that it was sad that he died, but all he missed out on while he was still alive and healthy. He barely met his many grandchildren, and didn’t meet some – like Ava Kalea. When he did, he wasn’t very warm and seemed uncomfortable. I still remember the one time he held Jackie. It didn’t last long and neither of them were comfortable.

He had strained relationships with all of his children – my brothers and sister. I don’t think that he and Chris talked for many, many years. I had quit talking to him some time before his death because of his abusive emails, threatening me and giving me his unsolicited advice – but the last straw was when he threatened to sue Mom for some kind of co-signing deal 20-30 years earlier.

He was definitely NOT a happy person – and that was what was so sad.

I think that he felt like he gave and gave and sacrificed so much to raise 4 children, that once he was divorced from Mom, he was just done. In his mind he had given enough and he wasn’t able or willing to give more. I could be wrong – and probably am , as I never really spent enough time with him after 18 or 20 to really know him.

Being the first born, I was really lucky to get a lot of attention from him as a kid. He spent lots of time with me – especially during baseball season, coaching, throwing batting practice and hitting ground balls. I ate that up and actually had some talent.

I guess that lasted until about jr high, when I started partying and wanting to hangout with friends.   Looking back, I wasn’t very dedicated and made a lot of stupid decisions. Guess that is growing up – or, not growing up.

After that, I never had a lot of interaction with him not involving some type of discipline. I guess we did take a couple of family trips – including my favorite place to vacation – Hawaii. One in particular I remember deciding that I wanted to marry a beautiful girl from Hawaii. That was the same year that Stacia was born – and now 37 years later, we are here in Del Mar with a little midget.

His chain smoking probably started while he was watching television ads showing how glamorous smoking cigarettes was. I think they even used to say that smokes were perfectly healthy … Crazy. Makes me think what we’re doing today that will look so stupid in the future. Will we pick up on the fact that sodas, fast ‘food’ and processed foods are causing a health epidemic? Will too much screen time prove deadly? Do cell phones really cause cancer?

Even though I don’t remember knowing anything about or any interest in politics, both my parents always voted Republican. I cannot say that, but definitely lean that way. Because of my father, I believe in capitalism and lesser government. I just don’t think we need a lot of laws or regulations that are unenforceable and just make life more difficult. Government is to do for the people what we cannot do for ourselves. That said, I have learned it is best not to discuss politics – especially with friends or family.

One thing about my dad is that I don’t remember him saying too many nice things. He seemed to complain a lot. Unfortunately, it seems that he handed that down too. I’m not sure I can credit him with my uncanny ability to make fun of anything and everybody else – without recognizing my own faults, but in my mind I do.

BUT here is the learning opportunity. It’s not too late. I can learn from my dad. I can try not to repeat history.

So far that is not going well with Jacqueline. Already at 14 years old, I haven’t seen her in about 2 ½ years. A horrible nightmare. A new, but not improved history.

Last year my friend Brooke told me he was kind of scared of my dad growing up. This year, Makaya told his mom that he’s afraid of me.

The learning definitely is not going well – at least not nearly as well as it could be.

I can only hope I’m learning as I get older and getting a little bit better every day. I make it a point to try to be as positive as possible with Ava Kalea.

She gets two choices every day: 1) She can have a good day or 2) She can have a GREAT day. Most days we both choose GREAT. It’s hard not to choose great, living in Del Mar and so close to the ocean. To me it just feels like it is the way life is supposed to be lived – although I still aspire to improve and build a better life, it’s really pretty great right now. And we are grateful.

If we see someone do something cool or well, we applaud. If we see a cool car, we call it a cool car. If someone is wearing a nice hat, we tell them we like their hat.

Sometimes I still get the urge to call someone a derogatory name, complain about the weather (not very often here in paradise) or bitch about the neighbors smoking – “How could someone be so discourteous?” Often it gets out. But I’m trying to hold back and over time, feel like I have improved.

Not how long it takes to change those types of habits. Could it be generations? Or can it be done with one decision – to change?

I’m not sure, but Thank You Dad for the many lessons. I’m still learning from them – and I appreciate you.

Lots of Love and Aloha,

I like to listen to / watch a lot of motivational videos on YouTube when I am working out at home.  One of the best quotes I heard today was

Very cool news today – I was contacted by Cara from Beachbody Inc about this blog.  I feel a little bad that I haven’t been as active here as I

In this episode of Juicing Naked with Joe Abs I make a healthy ‘V6’ or 6 vegetable whole juice. Thanks for watching, please subscribe to see future episodes.  Let me